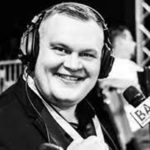 Dan, one of the UK’s best known Boxing commentators, has been carefully crafting his boxing knowledge and broadcasting skills with the ambition to cover not just boxing bouts, but stories from sports stars worldwide.